— In light of the devastating situation in Japan, this seems rather frivolous, talking about indulging in food, when many in Japan have none. But this post is a tribute to the people of Japan and a testament to their resilience and dedication to everything that they do including their food. Links on where and how to help are at the end of the post. —

I’ve had a love affair with Ramen when I first heard about it and subsequently tasted my first bowl in Nan-Ten (a Japanese restaurant tucked in the basement of a building in the heart of our Central Business District), which might have been back in 2007. I once thought of doing a ‘Best of the Best’ Tonkotsu Ramen 豚骨ラーメンHaunts in Singapore, and after visiting 11 authentic Ramen places in Singapore  and 2 chains. I definitely have my favourites!

I’m sure everyone has different criteria to what makes the best ramen, it could be the creaminess/ tastiness/ richness of the soup, the springiness or thickness of the noodles, the gelatinous-ness of the egg, the tenderness of the char shu, the variety of condiments or the no. of Japanese patrons in the restaurant. I’m 100% a soup(er) girl, 80% noodles and about 70% egg (it kinda gets me down when I see a FULLY cooked egg in my bowl of ramen).

So let’s see where  Charlotte’s Best Ramen Haunt Hunt has ventured? (listed below in no order of merit)

1. Marutama Ramen (Central)
Has the best melt-in-your-mouth char shu- always order an extra portion on the side. Not too wild about the ramen or the soup (too garlicky/ oniony for my liking).

2. Sapporo Miharu Ramen (Gallery Hotel)
One of the first places I ever went to for ramen and remember it to be pretty good overall – soup, eggs, char shu and noodles. Noodles resembled Chinese yellow mee but with more spring in its step.

3. Noodle House Ken (opp Cuppage Plaza)
This place was introduced to me by a friend and I’ve been there 4 more times since then. It’s pretty easily accessible since it’s in town, the space really cosy and it helps to go a little earlier say before 7pm before a queue starts to form. At Ken’s I always order my ramen with a knob of butter (I don’t know why) and sends me straight to Ramen Heaven 🙂 Soup is tasty, and noodles are similar to Chinese Yellow Mee but thinner and springier.

4. Ramen Santouka  (Central)
Tucked in the corner of Central’s Level 2 is Charlotte’s Ramen Haven. This is where I’ve had the B.E.S.T soup of all – creamy, mega tasty and RICH. Noodles are sppprinnnggyyy!! It’s packed with Japanese businessmen during lunch – little did I know that Santouka is a pretty famous Japanese Ramen chain in Japan. Plotting my next visit soon… *slurp*

5. Nan-Ten (now known as O-An) (Hong Leong Building)
This was the first place I’d ever tried Tonkotsu Ramen – and was blown away. I kept wanting to go back for weeks after! Although I’ve since found other haunts and this place has changed owners, it’s ramen is still pretty good in my books.

6. Menya ShinChan (Robertson Quay)
The only Ramen place I’ve seen serve Black Ramen (as seen in Camemberu’s blog post) – where the soup stock is layered with ‘scorched sesame and garlic oil’ and tastes pretty garlicky, which isn’t entirely my preference but how often do you get to drink black soup? The broth is not black tho it’s just the top layer. They too serve regular Shio, Shoyu and Miso flavours of ramen soup stock so you could definitely go for those. Filled also with Japanese patrons so you know it’s gotta be pretty darn good 🙂

7. Baikohken (Boat Quay/ North Canal Rd)
This was my most recent discovery with R. Sitting at the counter with the chefs and large boiling pot of soup in full view through a glass window, the chefs look Japanese well at least one of them is for sure. They joke and mess around with each other while preparing each bowl of ramen as the order is received. This type of Ramen is not quite my cup of tea (soup), with the soup somewhat lacking in flavour but its char siu most certainly something to shout about. The mound of beansprouts puts me off abit – it’s fried and I somehow don’t quite like the texture of beansprouts together with my noodles. But we spotted some Japanese natives slurping away so it MUST be authentic to a specific region. 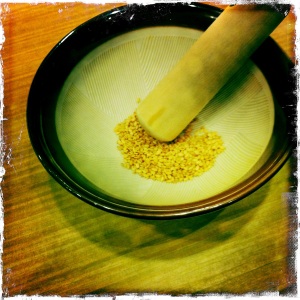 8. Yoshimaru Ramen Bar (Holland V)
A popular Hakata Ramen chain in Japan and franchised in Singapore by Jumbo Seafood, I quite enjoy Yoshimaru primarily for its condiment of Mentaiko (Spicy Pollock Roe – pictured above right) that goes splendidly with the soup. The ramen is thin and al dente (characteristic of Hakata Ramen), eggs are gelatinous and soup is decently tasty. Sesame seeds in a mini grinding bowl (pictured above left) are presented to you before your ramen arrives so you can get ‘cracking’ at grinding the sesame seeds to add flavour to your soup – incorporating interaction in your dining experience eh? The restaurant is rather informative about its history, its cuisine, and the way to eat ramen through various collaterals – which I found pleasantly surprising. So don’t make the mistake that R once did – adding vinegar to your soup. I’m sure it’s not against the law but you know it’s just not right…

9. Tampopo (Ngee Ann City)
I was thrilled when I found out Tampopo had opened an outlet at Ngee Ann City (near my then-workplace) as I’d heard so much about its Ramen. Yay! Tonkotsu Ramen within easy reach! Rockin’ Ramen with creamy soup, thin springy and crunchy noodles and jiggly egg to boot! Nothing will go wrong in Tampopo 🙂

10. Aoba Ramen (ION Orchard)
The lack of patrons says it all, what was once the talk of the town when it first opened in ION, Aoba Ramen is a victim of over-hype. Aoba Ramen hails from Hokkaido and whilst everyone was anticipating what was touted as the best ramen from Hokkaido, it certainly fell flat with lack-lustre noodles and almost tasteless soup. No more 2nd trip for me!

11. Sapporo Ramen Bishamon (Bukit Panjang Plaza)
Since moving to the SUPERWEST for work, this place happens to be one of THE closest ramen places and when the craving hits you just have to have it you know? This place is not too bad when you are far away from the real deal it’s pretty darn good. Noodles, soup and egg all in place. Watch out for the super sales leady who will sell you everything from her homemade lemon tea to extra ingredients for your ramen. But overall, not too bad if you are near here!

12. Ajisen Ramen (so many all over Singapore)
This is really Fast-food Ramen from Japan. They produce their own noodles with a similar concept to tubular spaghetti but thinner. The structure of the noodles makes for springy ramen 🙂 Soup’s pretty tasty but don’t expect  jiggly eggs, their eggs are pretty solidly hard-boiled. Nonetheless, great for a quick satisfying of an on-the-spot craving and great value for money over lunch – lunch sets include a drink and side dish with your ramen at $13nett. Puts a smile on your face.

13. Sushi Tei (again, all over Singapore)
One the pioneers to introduce the conveyor belt japanese dining concept to Singapore, it’s Ramen is pretty generic and like Ajisen, great for a quick satisfying of a sudden craving. Noodles resemble the chinese yellow noodles and the soup is not too bad, pretty hearty. Char siu – nothing much to hoot about actually. But overall it satisfies + they’ve got so many other dishes to supplement your meal 🙂

and we have come to the end of the review of all (i think) the Ramen Haunts I’ve hunted down in Singapore. Will post Tokyo’s Ichiran Ramen soon!

As part of my tribute to Japan in the wake of the numerous disasters, I’d like to highlight a couple of ways that we could help the nation through donations in the relief efforts

a) Cookyn with Mervyn’s Our Tribute to Japan class on 2 Apr (Sat)
– $150 per person. Donation box available on day of class for more donations.
– ALL proceeds will go to Japanese Association in Singapore to fund relief efforst
– Check out the link above for the menu.

b) WorldVision Singapore
– to help in providing supplies like water, food, milk powder and diapers to affected families and children

Dear Japan, God Bless you! Don’t give up!
親愛なる日本、お大事に! 頑張ってね!

3 thoughts on “Ramen and Praying for Japan”