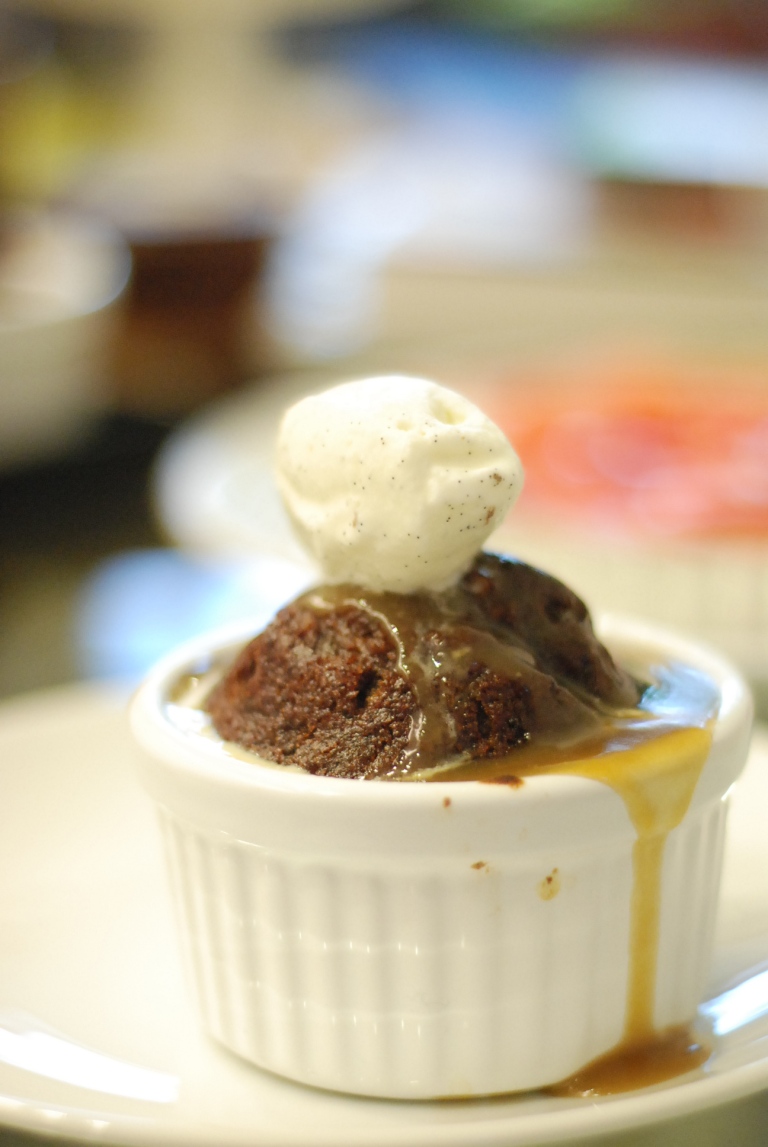 At long last! After years of trepidation and pure laziness and only wanting to eat Marmalade Pantry’s Sticky Date Toffee Pudding, I decided OK it’s really time for you to GET UP AND DO IT!

Thankfully I found me a fantastic recipe in one of my donna hay magazines and I made some for a tea party with old school friends and turned one into a birthday cake for one of them (trick candle and all *wink*, old-school style). Anyways here’s the recipe adapated from donna hay and my own ice cream recipe for you 🙂

For the Homemade Vanilla Bean Ice Cream (click for recipe here)
Replace vanilla essence with 1 vanilla bean.
For a creamier ice cream, reduce milk and increase cream by the same quantity to maintain the same overall volume of the mixture.

Notes:
1 I used Medjool dates
2 1 cup self raising flour = 1 cup plain flour sifted with 1½ tsp baking powder + pinch of salt
3 I reduced the original recipe as it yielded WAY too much sauce for my 8 puddings

1. Preheat oven to 180ºC.
2. Place the dates, boiling water and bicarbonate of soda in a bowl. Let stand for 5 minutes.
3. Blend date mixture + butter and sugar with a hand-held blender, and blend until well combined. (Alternatively, you may use a food processor.)
4. Add the eggs and blend until well combined.
5. Whisk in flour in batches until well combined.
6. Pour the mixture into 8  lightly greased ramekins or a lightly greased 26cm x 16cm tin lined with baking paper.
7. Bake the puddings for 30 minutes or until cooked when tested with a skewer (the skewer comes out clean)
8. In the meantime, prepare the toffee sauce. Place butter, cream and sugar in a saucepan over medium heat and stir until butter is melted.
9. Bring to the boil and cook for 5 mins or until the sauce thickens slightly.
10. When the puddings are ready, remove from the oven and leave to cool in the ramekins for at least 10 minutes. Serve with Toffee Sauce and Vanilla Ice Cream.

The puddings are delightful and not too dense, for a fluffier pudding (resembling a cake), try whisking in the eggs. If you are preparing this in advance, place puddings in the fridge with cling wrap. To serve, heat up puddings in the microwave in 10-second bursts on high until the pudding is warmed.

Sorry Marmalade! Got me own Sticky Date Toffee Pudding at home now!